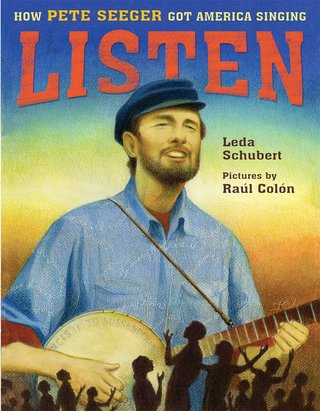 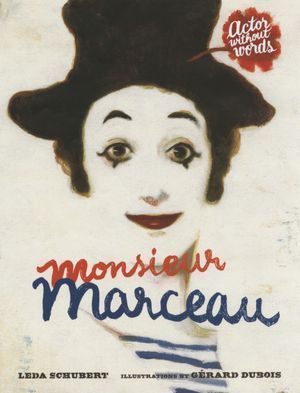 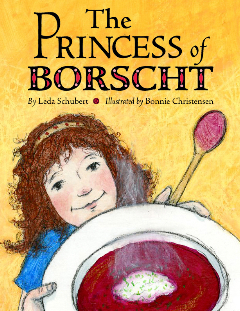 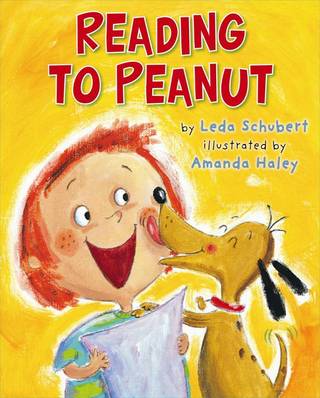 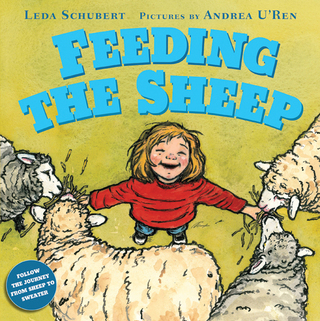 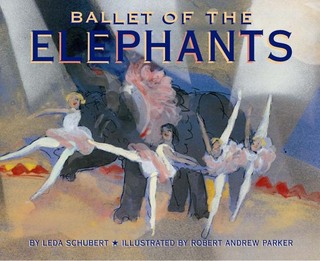 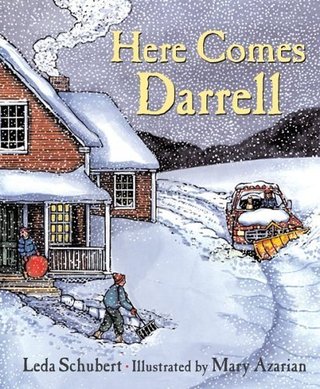 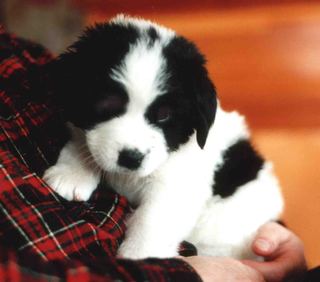 I've put this picture of the cutest puppy in the history of the world on this website twice. Can't have too many pictures of Winnie, I always say. 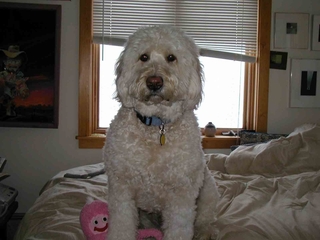 Pogo, our Goldendoodle (half Golden Retriever and half Standard Poodle). I never liked Poodles until we got Pogo, who is ever so amusing. Notice that he has a pink toy at his feet. It is about to be eviscerated, because he is studying to be a surgeon. He practices by removing the insides of all his stuffed toys. 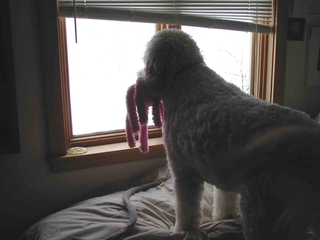 Pogo is watching a chipmunk at the bird feeder while holding his pink octopus, which will soon receive major surgery. See photo in center section for a photo of some earlier patients.

Why did you write a book about Pete Seeger?

Oh, there are so many reasons. He was a hero of mine for his music, energy, and the amazing things he did in his long life. If you read the book, you'll see. More soon.

Do you love dogs? I love dogs. I love a lot of dogs. I love one of my two dogs. The other one --- he is a challenge. The dog I love is named Pippa and the dog who is a challenge is Bunky. Here he is when he was the world's third most adorable puppy (after Winnie and Pippa and Pogo and Smee and Quillow and Ebenezer and Juno and Pignolia and Franz, all my other dogs).
OF COURSE I LOVE BUNKY! HE IS A HAPPY BOY. 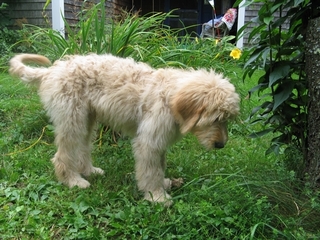 Bunky and Pippa on what used to be a couch and is now only sort of a couch. 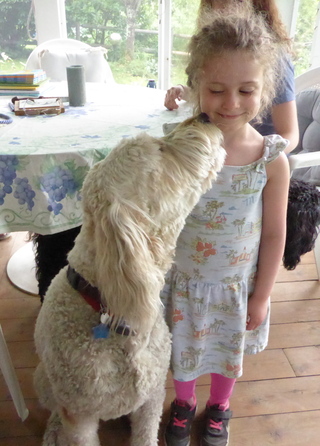 A very brave child meets our very bad dog for the first time. 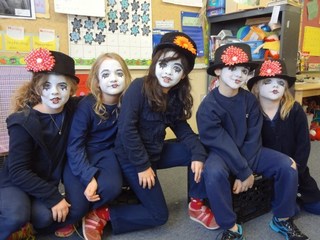 Mimes-in-training at the St. Francis Xavier school in Vermont

Questions and answers about MONSIEUR MARCEAU:

I wish somebody would ask me questions, that's what.

Questions and answers about THE PRINCESS OF BORSCHT:

Q: What is borscht?

A: A soup made from beets. Sounds yucky? Believe me, it's not, especially with a boiled potato and lots of sour cream. There are lots of different kinds; some are made with meat and some not. I don't eat meat, so my recipe is all vegetable.

Q: Why is there such an argument over the recipe?

A: Many of the characters in this story are Jewish, like my own family. We weren't religious; we were secular Jews. I never went to synagogue and we didn't celebrate holidays, but we were Jewish in a lot of ways. There was a lot of humor in my nuclear family, for example, and a lot of telling other people what to do. Does anybody in your family tell you what to do? 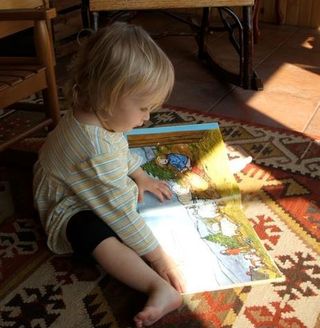 Miriam (not even two) reads Feeding the Sheep. So it's upside down. So what? I can read upside down if there aren't too many words.

Questions and Answers about FEEDING THE SHEEP
(Really, I have made up all the questions myself. Feel free to ask your own.)

Q: Why did you write this book?

A: The idea just came to me, and I grabbed it. Then of course it took lots of work to write it.

Q: Do you like sheep?
A: Yes, ever so much. But I don't have any. I think I should probably get some, don't you? Then Pogo and Pippa would have something to do besides eating my shoes. (Pogo doesn't really eat shoes any more. He is all grown up. Pippa is not.)

I'm going to knit some sheep to have around. You can knit some too! See the one I made right below this section? I have amazing talent. (Some grown men, when they have seen this sheep in person, have cried. Really. Possibly from laughing so hard, but still...)

Q: How did you learn about the whole process of making yarn from sheep?
A: Near me in Vermont there are bunches of weavers, spinners, dyers, knitters, and even sheep farms. I asked friends and more friends, I went to a sheep and wool festival, and I did some online research as well. I even learned to spin yarn from wool using a drop spindle! You could do this too, and it's great fun.

More questions soon, as soon as I make them up. Don't you have one or two? 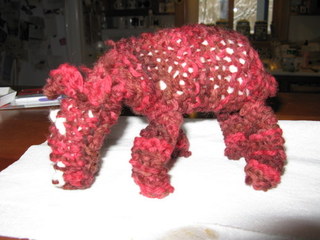 This is the pathetic sheep I made myself. I call him Eeyore. Do you all know who Eeyore is? He's in Winnie the Pooh. 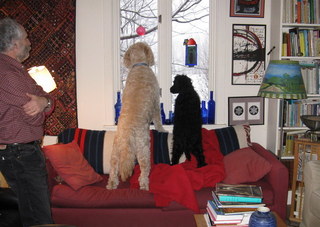 Pogo watches deer out the window. Pippa doesn't quite know what she's watching, but she was only a few months old at the time. 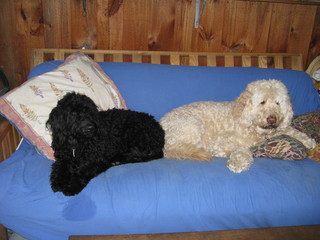 Pippa and Pogo in July, 2009. She's hard to photograph! Okay, yes, that could be drool below her. Just maybe.

Pogo and Winnie in the back of our Subaru, their own personal doghouse. I've heard you can buy a doghouse for around $100 or even build one yourself, but our dogs have more expensive tastes.
P.S. Subarus are the Vermont state car. They're everywhere, because they have 4-wheel drive.

QUESTIONS AND ANSWERS ABOUT MY BELOVED DOGS

Q: What dogs have owned you?
A: Over my lifetime so far, ten. Three Great Pyrenees (Quillow, Smee, and Ebenezer), one German Shepherd (Juno), one Beagle (Franz), one Shepherd mix (Pignolia), three Goldendoodles (Bunky, Pippa and Pogo), and Winnie, the dog of a lifetime. I loved all of these dogs more than words can tell. I bet you know what I mean.

Q: What kind of dog was Winnie?
A: Half Newfoundland and half St. Bernard. When she was six and a half weeks old, she was the cutest puppy anyone had ever seen on the entire planet. That's the truth.

Q: Did she get along with her little brother, Pogo?
A: They loved each other to pieces, but for the first six months that Pogo was here she wouldn't go within five feet of him.

Q: What kind of dogs are Pogo and Pippa and Bunky?
A: Goldendoodles (in other words, mutts.). We had never heard of this mix when we went "just to look" at puppies, half Standard Poodle and half Golden Retriever. Turns out they're much in demand these days, but nobody knew about them then. Pogo weighed quite a bit himself, by the way. 110, since you didn't ask.

Q: What was Pogo like?
A: He was very funny, very sweet, and didn't have much of a brain. Dogs don't really need much of a brain; they still get everything they want. (Winnie, though, was smarter than most people.) He studied to be a surgeon by taking all the stuffed animals apart and investigating the insides.

Q: What about Pippa?
A: She was born in northern Vermont and we got her at the end of January, 2009. She just might be nuts. She collects things and has a whole area outside of twigs, branches, and small trees. She carries other things around the house and cries because she wants to bury them somewhere, like in the couch cushions. She is digging holes everywhere--she has a plan. What is it?
Also she swims or plays in mud every single day. She's smaller than Pogo but she bosses him around.
And me.

Q: Can we ask you more questions about your dogs?
A: Any time.

QUESTIONS AND ANSWERS ABOUT "BALLET OF THE ELEPHANTS"
Q. Why did you write this book?
A. It's all in the book's notes, but I'll give you a hint: I danced as the sugarplum fairy when I was 5 or 6, my periodontist told me I had to floss my teeth, and I am in awe of elephants.

More significantly, I loved the idea of these three geniuses (in different fields)and all the elephants coming together to create something so playful. I wanted to learn all about it. So I did!

Q. Does it bother you to see elephants in tutus?
A. Yes. But elephants in tutus are sometimes in a better situation than elephants in the wild. I think if human beings could solve the problems we've created for elephants, we'd be making a big step toward solving the problems we're creating for ourselves. To be honest, I sometimes care more about the elephants.
Recently I bought a piece of art painted by an elephant--I kid you not-- to support conservation and reeducation programs for elephants. It's lovely.
And what about all the many domesticated animals we take for granted? Is it just that we're more used to seeing horses used in such a variety of situations? I'm not being flippant; it's all so complicated.
P.S. I don't eat anything that has four legs. I sometimes eat chicken and fish, but less all the time. Maybe I could live on bread.

Q. Have you ever been to St. Petersburg, Russia?
A. No. But I would love to go. What a beautiful city.

Send me your own questions!

Q: Why did you write this book?
A: Darrell Farnham was a wonderful man and I knew him (not as well as I wish I had) for many years. He always made sure my driveway was plowed in snowstorms in time for me to get to work. He dug our pond, which now has bullfrogs and a snapping turtle and lots of ooze (and maybe even leeches), but the dogs still love to swim in it. He was a good man; the kind of person you wish there were more of. A local hero.
And one day I thought I should write about him.

Q: Did all the things in the book really happen?
A: No. But Darrell did love to carve or whittle, he cared about animals and people, and he had a whole bunch of trucks. I made up all the families, the situations, the conversations, and all the stuff about the barn roof.

Q: How long did it take you to write HERE COMES DARRELL?
A: Longer than you might think. Months and months. I revised the story many, many times. After it was accepted for publication, I revised it even more with the helpful suggestions of my editor at Houghton. I could revise forever!

Q: How do you feel about Mary Azarian's illustrations?
A: I could not be happier. As I wrote the book, I kept imagining her distinctive woodblock artwork! Didn't she do a wonderful job? 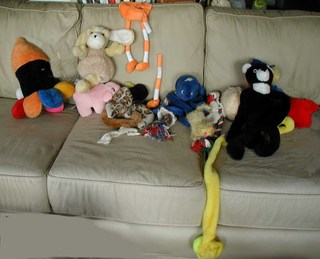 Here are some of Pogo's surgical experiments. Every one of these animals is missing a body part, I am sorry to say. Look carefully and see if you can identify the missing part (an eye, an ear, a leg, etc.). Sorry to be so gruesome, but remember, he is studying to be a surgeon!

I was unable to find the photo I once took of all of the stuffing we had collected. It was enough to stuff a small chair.

And the K/1 classes wrote this:
Winnie wants to go to school.
Winnie barks, but she can't read.
Annie will teach her to read.
Annie gives her books.
Winnie rips the books and eats them.
Annie says, "Don't eat the books!"
Annie gets Winnie in the car.
Winnie goes to school. The teachers will teach Winnie.